A Moving Story of Two Fathers—One Whose Daughter Was Killed in the Bombing, and the Other the Father of Her Killer, Timothy McVeigh—and of Forgiveness and How Good Can Overcome Evil

Grand Rapids, Mich., Nov. 4, 2019 – Zondervan Books has contracted to publish Grace from the Rubble: Two Fathers’ Road to Reconciliation after the Oklahoma City Bombing, the riveting true story of two men who appeared destined to be enemies—but who instead formed an unexpected bond in the wake of terrorism and tragedy.

Written by Jeanne Bishop, Grace from the Rubble will release April 14, 2020, five days before the 25th anniversary of the Oklahoma City Bombing. Bishop is represented by Greg Daniel of Daniel Literary Group. World rights were acquired by Senior Acquisitions Editor Mick Silva. 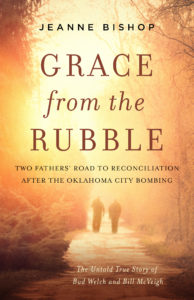 The Oklahoma City bombing on April 19, 1995, was the deadliest attack of domestic terrorism in U.S. history, and it became one in a long line of violent attacks that have left communities across the nation searching for healing and hope.

Grace from the Rubble tells the intertwining stories of four individuals:

With searing details by first-hand witnesses (including the governor of Oklahoma), masterful storyteller Jeanne Bishop describes the suspenseful scenes leading up to that fateful day and the dramatic events after, as one father buried his daughter and the other saw his only son arrested and tried for mass murder. Vivid and haunting, this true story is rich with memories and beautiful descriptions of the nation’s heartland, a place of grit and love for neighbors and family. Bishop shares how murder affected her own family and led her to meet Bud and, ultimately, how they learned to see humanity amidst inhuman violence.

“With compassion for all who have been touched by tragedy, this poignant narrative will touch readers’ hearts with the astonishing forgiveness that led to an extraordinary friendship,” says Mick Silva, Senior Acquisitions Editor.

About the Author: Jeanne Bishop grew up in Oklahoma City and is a public defender and human rights advocate who has written for online publications including Huffington Post and CNN.com, magazines, newspapers, law journals and academic books. Her memoir, Change of Heart, chronicles the murder of three of her family members and her forgiveness of and reconciliation with their killer.

Grace from the Rubble: Two Fathers’ Road to Reconciliation

after the Oklahoma City Bombing